The Faustpatrone, is an anti-tank rocket that appears in FH and FHSW.

In FHSW, it is an effective weapon against light tanks and some medium tanks. But when faced against tanks like the British Churchill and the Soviet T-34, the Faustpatrone is too weak and will create disastrous results. Aiming the Faustpatrone is not easy, atleast at range since there is no sights or even crosshair available. Since it is so small you carry up to four of them. Which can be advantageous when relatively little damage needs to be dealt.

It is quite rare, found in 1943 such at the Battle of Orel and Sand Storm or randomly assigned to the unlucky soldier in Berlin 1945. 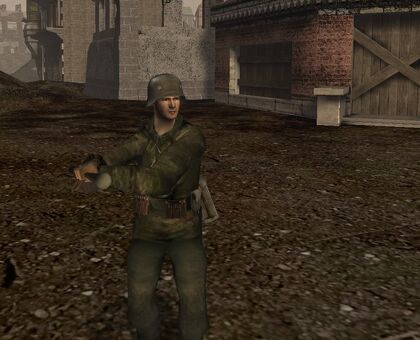 The Faustpatrone was much smaller in physical appearance than the better-known Panzerfaust. Development of the Faustpatrone started in the summer of 1942 at the German company HASAG with the development of an even smaller prototype called Gretchen ("Little Gretel") by a team headed by Dr. Heinrich Langweiler in Leipzig.

The basic concept was that of a recoilless gun; neither the Faustpatrone, nor its successor the Panzerfaust were rocket launchers!

The Faustpatrone 42 had an armor piercing capability of a 100 millimeters. Initial velocity of the projectile was 25m/sec, slightly less than those of the Faustpatrone I and II. It weighed only one kilogram and overall length is less than half of the Panzerfaust models.

A similar weapon in particular to the Faustpatrone 42 was the Panzerwurfmine used by Luftwaffe ground troops. It was thrown and fins would be folded for a stabilized flight.

To use the Panzerfaust, the soldier must remove the safety, aim, and with a little squeeze, fire the projectile. Unlike the Bazooka or Panzerschreck, the Panzerfaust didn't have a trigger. It had a pedal-like lever near the projectile that would ignite the propellant when squeezed.
The warhead was accelerated to a speed of 28 m/s, had a range of about 30 m and an armor penetration of up to 140 mm of plain steel. Soon a crude aiming device similar to the one used by the Panzerfaust was added to the design; it was fixed at a range of 30 m.
Several designations of this weapon were in use, amongst which Faustpatrone 1 or Panzerfaust 30 klein. However, it was common to refer to this weapon simply as the Faustpatrone. Of the earlier model, 20,000 were ordered and the first 500 Faustpatronen were delivered by the manufacturer, HASAG Hugo Schneider AG, Werk Schlieben, in August 1943.

Two main problems had already surfaced much earlier in the weapon's trials: firstly, the original model did not have a sighting device, and, secondly, due to the odd shape of the warhead, it tended to ricochet off or explode with lesser effect on sloped armour, especially evident when deployed against the Russian T-34. Since these problems surfaced early in testing, the development and production of its successor, the Panzerfaust 30, had already begun by the time of the first deliveries, inhibiting incorporation of possible solutions to the problems in the newer design and perpetuating its weaknesses. Still, the small and simple Faustpatrone was kept in production well into 1945. During the Second World War, it remained the most common German anti-armour weapon. A disadvantage with all Panzerfausts, except for the 250, was that the firer could not reload the weapon.