When the British brought the first tanks into combat during the first world war such as the Mark V tank, the German infantry had no specialized handweapon to deal with them. A makeshift solution was to bundle several hand grenades together making it effective through sheer explosive power. The practice continued in the second world war especially on the eastern front where both sides made these makeshift grenade bundles. An issue was both ingame and during real use was that the grenade bundle doesn't stick to the tank and could roll off. Solutions to could be to put the bundle inside a sandbag or break in with an axe at vulnerable parts of the vehicle such as ventilation shafts and throw the grenade there.

The Stielhandgrante M24 grenade could be used in an improvised "bundle" style with another six explosive heads (without their sticks) wired around the central stick grenade. These were known as Geballte Ladung ("concentrated load") and were very effective against armoured vehicles and fortifications. This anti tank grenade can be thrown very far, both because it is thrown as far as a ordinary grenade and because it has a 5 second fuse so it slides and bounces instead of exploding on impact as many other AT grenades do. A kit with the Geballte Ladung may only have a Mauser 98K as an other weapon. Or this grenade may be a complement to other AT equipment like a Landmine or a Kb ppanc wz.35.

In a similar fashion multiple RGD-33 grenades were bundled together. All tank hunter including those with this grenade bundle have the Mosin Nagant M91-30 rifle whereas the anti-tank kits that have captured panzerfaust have Mosin carbines and the other anti-tank kits have the TT-33 with either the PTRD-41, PTRS-41 or M1 Bazooka as their main weapon. 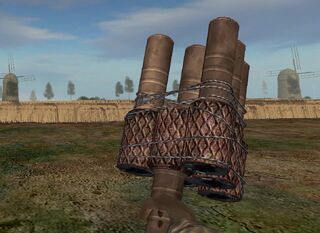