The Heinkel He 111 was a German aircraft designed by Siegfried and Walter Günter in the early 1930s in violation of the Treaty of Versailles. Often described as a "Wolf in sheep's clothing", it masqueraded as a transport aircraft, though its actual purpose was to provide the Luftwaffe with a fast medium bomber. Perhaps the best-recognised German bomber due to the distinctive, extensively glazed, bullet-shaped "greenhouse" nose of later versions, the Heinkel was the most numerous and the primary Luftwaffe bomber during the early stages of World War II. It fared well until the Battle of Britain, when its weak defensive armament, relatively low speed, and poor manoeuvrability were exposed. Nevertheless, it proved capable of sustaining heavy damage and remaining airborne. As the war progressed, the He 111 was used in a variety of roles on every front in the European Theatre. It was used as a strategic bomber during the Battle of Britain, a torpedo bomber during the Battle of the Atlantic, and a medium bomber and a transport aircraft on the Western, Eastern, Mediterranean, Middle Eastern, and North African Fronts. Although constantly upgraded, the Heinkel He 111 became obsolete during the latter part of the war. It was intended to be replaced by the Luftwaffe's Bomber B project, but the delays and eventual cancellation of the project forced the Luftwaffe to continue using the He 111 until the end of the war. Manufacture ceased in 1944, at which point, piston-engine bomber production was largely halted in favour of fighter aircraft. With the German bomber force defunct, the He 111 was used for transport and logistics. The design of the Heinkel endured after the war in the CASA 2.111. The Spanish received a batch of He 111H-16s in 1943 along with an agreement to licence-build Spanish versions. Its airframe was produced in Spain under license by Construcciones Aeronáuticas SA. The design differed significantly in powerplant only. The Heinkel's descendant continued in service until 1973, when it was retired.

The H variant of the He-111 series was more widely produced and saw more action during World War II than any other Heinkel variant. Owing to the uncertainty surrounding the delivery and availability of the DB 601 engines, Heinkel began tests with the 820 kW (1,100 hp) Junkers Jumo 211 powerplants. The somewhat larger size and greater weight of the Jumo 211 engines were unimportant considerations for a twin engine design, and the Jumo was used on almost all early-war bomber designs. When the Jumo was fitted to the P model it became the He 111 H.

Production of the H-3, powered by the 895 kW (1,200 hp) Jumo 211 D-1, began in October 1939. The experiences during the Polish Campaign led to an increase in defensive armament. MG 17s were fitted whenever possible and the number of machine guns was increased to seven. Normally one MG 17 would be installed in the nose, one in the ventral position, dorsal position and one in each waist window position. The two waist positions received an additional MG 15 or 17. On some Heinkels a permanent belt-fed MG 17 was installed in the tail.

After the Battle of Britain, smaller scale production of the H-4s began. The H-4 was virtually identical to the He 111 P-4 with the DB 600s swapped for the Jumo 211D-1s. This variant also differed from the H-3 in that it could either carry 2,000 kg (4,410 lb) of bombs internally or mount one or two external racks to carry one 1,800 kg (3,970 lb) or two 1,000 kg (2,210 lb) bombs. As these external racks blocked the internal bomb bay doors, a combination of internal and external storage was not possible. A PVR 1006L bomb rack was fitted externally and a 835 L (221 US gal) tank added. The PVR 1006L was capable of carrying a SC 1000 1,000 kg (2,210 lb) bomb. Some H-4s had their PVC racks modified to drop torpedoes. Later modifications enabled the PVC 1006 to carry a 2,500 kg (5,510 lb) "Max" bomb. But 1,000 kg (2,200 lb) "Hermann" or 1,800 kg (3,970 lb) "Satans" were used more widely. The H-5 series followed in February 1941, with heavier defensive armament. Like the H-4, it retained a PVC 1006 L bomb rack to enable it to carry heavy bombs under the fuselage. The first ten He 111 H-5s were pathfinders, and selected for special missions. The aircraft sometimes carried 25 kg flashlight bombs which acted as flares. The H-5 could also carry heavy fire bombs, either heavy containers or smaller incendiary devices attached to parachutes. The H-5 also carried LM A and LM B aerial mines for anti-shipping operations. After the 80th production aircraft, the PVC 1006 L bomb rack was removed and replaced with a heavy-duty ETC 2000 rack, enabling the H-5 to carry the SC 2500 "Max" bomb, on the external ETC 2000 rack, which enabled it to support the 5,000 lb (2,300 kg) bomb. Some H-3 and H-4s were equipped with barrage balloon cable-cutting equipment in the shape of cutter installations forward of the engines and cockpit. They were designated H-8, but later named H8/R2. These aircraft were difficult to fly and the production stopped.

The He 111Z Zwilling was a design that entailed the merging of two He 111s. The design was originally conceived to tow the

Messerschmitt Me 321 glider. Initially, four He 111 H-6s were modified. This resulted in a twin-fuselage, five-engine aircraft. They were tested at Rechlin, and the pilots rated them highly. A batch of 10 were produced and five were built from existing H-6s. The machines were joined by a centre wing formed by two sections 6.15 m in length. The powerplants were five Jumo 211F engines at 1,000 kW (1,340 hp) each. Total fuel capacity was 8,570 L (2,260 US

gal). This was increased with the addition of four 600 L (160 US gal) drop tanks. It could tow a Gotha Go 242 glider or Me 321 for up to10 hours at cruising speed. It could also remain airborne if the three centralised powerplants failed. The He 111 Z-2s and Z-3s were also planned as heavy bombers carrying 1,800 kg (3,970 lb) of bombs and having a range of 4,000 km (2,500 mi). The ETC extensions allowed for a further four 600 L (160 US gal) drop tanks to be installed. The He 111 Z-2 could carry four Henschel Hs 293 anti-shipping guided missile, which were guided by the FuG 203b Kehl III missile control equipment. With this load the He 111Z had a range of 1,094 km (680 mi) and a speed of 314 km/h (195 mph). Its maximum bombload was 7,200 kg (15,870 lb). To increase power the five Jumo 211F-2 powerplants were to be fitted with Hirth TK 11 superchargers. The armament was the same as the H-6 with the addition of one 20 mm MG 151/20 in a rotating gun-mount of the centre section. The variant did not display any convincing (stable) flight performance. The layout of the He 111Z had the pilot and his controls in the port fuselage only. Only the controls themselves and essential equipment remaining in the starboard section. The aircraft had a crew of seven; a pilot, first mechanic, radio operator and gunner in the port fuselage, and the observer, second mechanic and gunner in the starboard fuselage. The Z-3 was to be a reconnaissance version and was to have additional fuel tanks increasing its range to 6,000 km (3,730 mi). Production was due to take place in 1944, just as bomber production was being abandoned. The long-range variant designs failed to come to fruition. The He 111Z was to have been used in an invasion of Malta in 1942 and as part of an airborne assault on the Soviet cities Astrakhan and Baku in the Caucasus in the same year. During the Battle of Stalingrad their use was cancelled due to insufficient airfield capacity. Later in 1943 it helped evacuate German equipment and personnel from the Caucasus region and during the Allied invasion of Sicily attempted to deliver reinforcements to the island. During operations, the He 111Z did not have enough power to lift a fully loaded Me 321. The He 111s in RATO (rocket assisted takeoff) units were supplemented by rocket pods. Two were mounted beneath each fuselage and one underneath each wing. This added 500 kg (1,100 lb) in weight, but gave additional thrust to the engines. The pods were then released by parachute after takeoff. The He 111Z's operational history was minimal. One such machine was caught by RAF fighter aircraft over France on 14 March 1944. The He 111Z was towing a Gotha Go 242, and was shot down. Eight were shot down or destroyed on the ground in 1944. 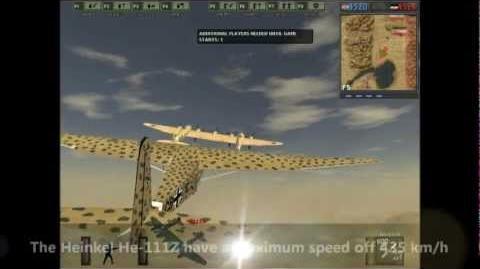