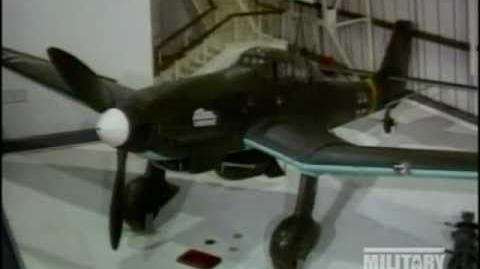 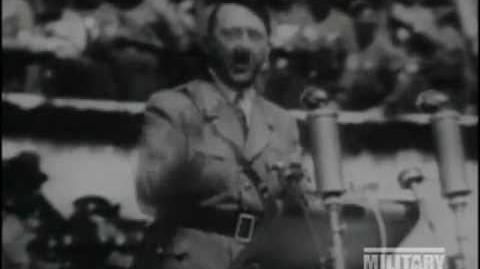 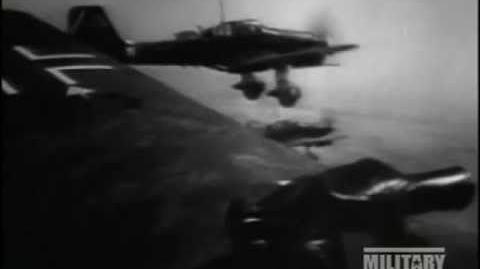 The Junkers Ju 87 or Stuka(from Sturzkampfflugzeug, "dive bomber") was a two-man (pilot and rear gunner) German ground-attack aircraft. Designed by Hermann Pohlmann, the Stuka first flew in 1935 and made its combat debut in 1936 as part of the Luftwaffe's Condor Legion during the Spanish Civil War.

The aircraft was easily recognizable by its inverted gull wings, fixed spatted undercarriage and its infamous Jericho-Trompete ("Jericho Trumpet") wailing siren, becoming the propaganda symbol of German air power and the blitzkrieg victories of 1939–1942. The Stuka's design included several innovative features, including automatic pull-up dive brakes under both wings to ensure that the aircraft recovered from its attack dive even if the pilot blacked out from the high acceleration. Although sturdy, accurate, and very effective, the Ju 87 was vulnerable to modern fighter aircraft, like many other dive bombers of the war. Its flaws became apparent during the Battle of Britain; poor manoeuvrability and a lack of both speed and defensive armament meant that the Stuka required heavy fighter escort to operate effectively. The Stuka operated with further success after the Battle of Britain, and its potency as a precision ground-attack aircraft became valuable to German forces in the Balkans Campaign, the African and Mediterranean Theaters and the early stages of the Eastern Front campaigns where Allied fighter resistance was disorganised and in short supply. Once the Luftwaffe had lost air superiority on all fronts, the Ju 87 once again became an easy target for enemy fighter aircraft. In spite of this, because there was no better replacement, the type continued to be produced until 1944. By the end of the conflict, the Stuka had been largely replaced by ground-attack versions of the Focke-Wulf Fw 190, but was still in use until the last days of the war. An estimated 6,500 Ju 87s of all versions were built between 1936 and August 1944. Oberst Hans-Ulrich Rudel was the most notable Stuka ace and was the most highly decorated German serviceman of the Second World War. On 29 December 1944, he became the only serviceman to receive the highest German military award, the Knight's Cross with golden Oak Leaves, Swords and Diamonds.

At the end of 1939 Ju-87B-l has been replaced in manufacture by diving bomber Ju-87B-2 on which the bar for removal of an expendable bomb for limits of a circle of rotation of a screw for the first time has appeared. Besides it has been entered hydraulic, instead of manual controls of doors of the radiator, the improved screw with more broad blades, bombing loading was increased up to 1000 kg. Various factory versions of this modification included Ju-87B-2/U2 with the improved radio station, Ju-87B-2/U3 with reinforced armour protection for use in a role of an attack aircraft and Ju-87B-2/U4 with a ski landing gear.

To the beginning of the World War 2 Germany had 336 airplanes Ju-87B in fighting parts.

Manufacturing had moved on to the Ju-87 D-3 in late 1942, with this variant featured improved armor protection to optimize for the schlacht role. It did retain the underwing dive brakes, but had no bomb crutch and no sirens. Some Ju-87D-3s were converted to "Ju-87D-4" torpedo bombers, but they were not used operationally and were later converted back to Ju-87D-3 configuration. The Ju-87D-3 was used in experiments with personnel pods, with one such pod carried on the top of each wing outboard of the landing gear. Two people could ride in tandem in each pod, and in principle the pods could be released in a shallow dive, to deploy parachutes for a soft landing. The whole scheme was questionable and though the Stuka was evaluated with the pods, apparently they were never paradropped.

Under the wings of the Ju 87 D-4, two weapons containers, each containing six 7.92-mm MG-81s. With a rate of fire of 6,000 rounds per minute generate, however, it isn't enough  2000 rounds in 20 seconds to destroy tank. The main task of this weapon is to eleminate enemy infantry, but not tanks, as the caliber is too small.

This version of the Ju 87 has 3 cluster bombs. In each bomb there are 40 armor-piercing SD 4/HL bomblets that are released when launched. To distribute the submunition to the large area, you shouldn't throw the bombs too deep. The effeciency of both weapons against tanks and infantry is very high.

Since the Stuka had undergone the "weight creep" that typically afflicts combat aircraft over their evolution, its wing loading had become unacceptable, and in early 1943 production moved on in turn to the Ju-87 D-5, which featured distinctive "pointy" extended wingtips to improve handling, as well as the jettisonable landing gear developed for the Ju-87C series. The dive brakes were deleted after initial Ju-87 D-5 production since it was used almost exclusively in the schlacht role. The two forward-firing MG-17 machine guns were also replaced with twin MG-151/20 20 millimeter cannon.

Confronted with a hostile air environment, by mid-1943 the Stuka was limited mostly to night operations. The Ju-87 D-5 had no particular optimizations for flying at night, with pilots coming in low and slow and dropping antipersonnel bombs on groups of incautious Allied troops. The Luftwaffe learned this trick from the Soviets, who had become fond of using little Po-2 biplanes on such harassment raids earlier in the war.

With the Ju 87 G variant, the aging airframe of the Ju 87 found new life as an anti-tank aircraft. This was the final operational version of the Stuka, and was deployed on the Eastern Front. The reverse in German military fortunes after 1943 and the appearance of huge numbers of well-armoured Soviet tanks caused Junkers to adapt the existing design to combat this new threat. The Hs 129B had proved a potent ground attack weapon, but its large fuel tanks made it vulnerable to enemy fire, prompting the RLM to say "that in the shortest possible time a replacement of the Hs 129 type must take place." With Soviet tanks the priority targets, the development of a further variant as a successor to the Ju 87D began in November 1942. On 3 November, Erhard Milch raised the question of replacing the Ju 87, or redesigning it altogether. It was decided to keep the design as it was, but to upgrade the powerplant to a Jumo 211J, and add two 30 mm (1.18 in) cannon. The variant was also designed to carry a 1,000 kg (2,200 lb) free-fall bomb load. Furthermore, the armoured protection of the Ilyushin Il-2 Sturmovik was copied, to protect the crew from ground fire now that the Ju 87 would be required to conduct low level attacks. Hans-Ulrich Rudel, a Stuka ace, had suggested using two 37 mm (1.46 in) Flak 18 guns, each one in a self-contained under-wing gun pod, as the Bordkanone BK 3.7, after achieving success against Soviet tanks with the 20 mm MG 151/20 cannon. These gun pods were fitted to a Ju 87 D-1, W.Nr 2552 as "Gustav the tank killer". The first flight of the machine took place on 31 January 1943, piloted by Hauptmann Hans-Karl Stepp. The continuing problems with about two dozens of the Ju 88P-1, and slow development of the Hs 129 B-3, each of them equipped with a large BK 7.5 cm (2.95 in) cannon in a conformal gun pod beneath the fuselage, meant the Ju 87G was put into production. In April 1943, the first production Ju 87 G-1s were delivered to front line units. The two 37 mm (1.46 in) cannons were mounted in under-wing gun pods, each loaded with a six-round magazine of armour-piercing tungsten carbide ammunition. With these weapons, the Kanonenvogel ("cannon-bird") or Panzer Knacker ("Tank breake"), as it was nicknamed, proved spectacularly successful in the hands of Stuka aces such as Rudel. The G-1 was converted from older D-series airframes, retaining the smaller wing, but without the dive brakes. The G-2 was similar to the G-1 except for use of the extended wing of the D-5. 208 G-2s were built and at least a further 22 more were converted from D-3 airframes. Only a handful of production Gs were committed in the Battle of Kursk. On the opening day of the offensive, Hans-Ulrich Rudel flew the only "official" Ju 87 G, although a significant number of Ju 87D variants were fitted with the 37 mm (1.46 in) cannon, and operated as unofficial Ju 87 Gs before the battle. In June 1943, the RLM ordered 20 Ju 87Gs as production variants. The G-1 later influenced the design of the A-10 Thunderbolt II, with Hans Rudel's book, Stuka Pilot being required reading for all members of the A-X project. 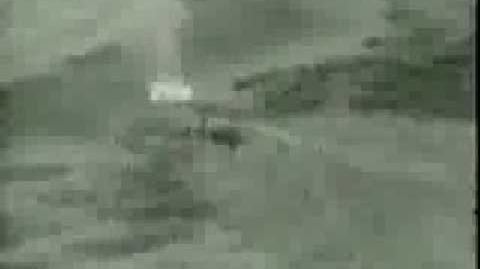 Retrieved from "https://fhsw.fandom.com/wiki/Junkers_Ju_87_%22Stuka%22?oldid=21849"
Community content is available under CC-BY-SA unless otherwise noted.