This rifle grenade was an improvement of the Gewehr-Panzergranate but in fhsw is the first HEAT or rifle grenade against vehicles that is available for 98K from the battle of El Alamein of 1942 until the battles of Berlin, were the Gross Panzergranate 61 can be seen but very rarely in the plethora of different Anti-tank weapons available and does not have its own kit unlike the previous rifle grenade.

Like the HEAT rounds for the Kampfpistole but with sights for higher accuracy at range. Like all rifle grenades the reload is quite long compared to other explosive weapons. Unlike other rifle grenades there is no delay when firing. A similar British weapon is the No.68 AT Grenade which appears sometimes on the same maps.

Unlike Anti Tank kits with the Kampfpistole you also have the Mauser 98K which is a more versatile weapon that is easier to use against infantry since it has a magazine of five rounds, higher projectile velocity and sights it can be effective at farther ranges.

After the Panzerfaust has been introduced these rifle grenades are no longer used except possibly gotten from an "Random HEAT" kit along with german and foreign HEAT weapons ranging from the RPG-43 anti tank grenade to the PIAT and M1 Bazooka. 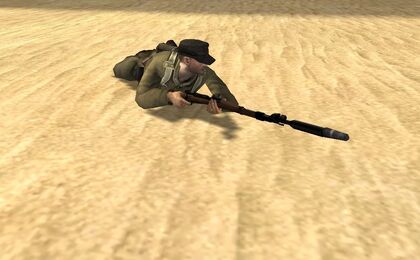 It can also be gotten at random when picking the "Random HEAT" kit, the rifle accompanied may not be the Mauser 98K.

Found in the Random HEAT kit shown above or as a pick-up kit found on Eagles Nest 1945, the projectile head is the same as the "Gr61" on the Kampfpistole, which is the most effective HEAT grenade for both weapons. The user may carry as many as eight rifle grenades. The high penetration of the projectile and large amount of them carried means it can wear down even Soviet heavy tanks by continous fire.