The Pzkpfw V Panther was a medium tank fielded by Nazi Germany in World War II that served from mid-1943 to the end of the European war in 1945. It was intended as a counter to the T-34, and to replace the Panzer III and Panzer IV; while never replacing the latter, it served alongside it as well as the heavier Tiger tanks until the end of the war. The Panther's firepower, and frontal protection were undermined by its mediocre mobility, absolutely horrid reliability, and questionable cost. It was quickly discarded by most nations who could afford new Allied tanks post war.

Strange but it is true. The Ausf A wasn't the first variant but the Ausf D. The Ausf D have two variants. The D1 and the D2. Ingame we have the D2 but it is mentioned as the Ausf D. The Ausf D can be recognized by the three 92mm Grenade smoke launchers on both side of the turret like the early Ausf E Tigers. The ball mount built in the glacis plate will be added in the late models of the Ausf A and later variants and not in the Ausf D. Like the Ausf A, the Ausf D will have a driver’s visor in the glacis plate while the Ausf G and later models will have a periscope. And the commander cupola have no periscopes. Of course many other modifications are be taken which lead to the Ausf A and G. The Ausf D was take in production in early 1943 until September 1943. At least 840 Ausf D2's were built.

What is quite extraordinary on this variant ingame is that the hull mounted machinegun is a MP 40 instead of a MG 34, other vehicles with the MP 40 or other SMG generally have firing ports for it on the back and sides of the turret. Although a small detail this means the gunner in hull has a subpar weapon for anything else than close range. Since the MG 34 and many other machineguns have higher damage, ammo capacity and rate of fire. On the map Earned in Blood there is a PPSh-41 that rivals the MG 34 though firing pistol rounds.

The Flakpanzer V "Coelian" is based on this variant of the Panther.

This is the OT-Stahlunterstände typ D mit aufgesetzten Pantherturm, or ingame know as the Panther Turret, is an example how smart Germans are in building fortifications like the Siegfriedlinie or the popular and the infamous Atlantikwall. Germans have captured tanks and use them against the builders. Some tanks are be damaged but can be use for other purposes like a carriage for new vehicles like tank destroyers or as weaponry for bunkers. The Panther was one of them. Used as tank destroyer (Jagdpanther) or the turret as stationary anti-tank gun. It was built on a small bunker which be place in the ground. It can be enter via stairs behind the turret. It have been used in the Atlantikwall but also in the streets of Berlin. The turret ingame is from the Ausf. D variant. The picture on the left side show us a Panther Ausf. D turret in Berlin after the war. You can only recognize it by the small port on the left side of the turret which you can only find in the Ausf D. turrets. This turret lost his commander cupola. Some sources report us that smoke launchers have been removed for using on other tanks, because the smoke was only for giving cover while the tank falls back.

Later the Ausf D2 have been modified which lead to the early model of the Ausf A. The Ausf A featured a redesigned turret with higher front armor and without the smoke grenade launchers. It will have the new cast commander’s cupola with a mounting bracket for an anti-aircraft MG34. The later models will have a ball-mounted MG34 in the frontal plate. Some Ausf D's will have side armor skirts. The Ausf A will have those skirts standard. The production of the early models start in August 1943 and end it with the late models in May 1944. At least 2200 vehicles are be built.

In 1944, a new weapon will do his debut; it is the Night Vision. A special unit variant will enter the battlefield with modern equipment. Five Panther Ausf A and G's will be equipment with the new 30cm Sperber FG 1250 infrared searchlight with range of 600m. The driver, the gunner and even also the machine-gunner on the roof will have a night vision. The machine-gunner in the fuselage have no night vision.

The Ausf G was the last Panther variant which saw service during World War Two. However, it wasn't the last variant designed. The Ausf F was the last variant and even before this variant, there was another variant planned which was the Panther II. In March 1944, the first Ausf G was produced. The new Panther was much more reliable than previous models and became the most numerous model. At least 2953 vehicles were produced, making it the most produced Panther variant. The G variant had many new features. These included a new design for the top hull hatches, removal of the driver’s visor in the glacis front plate and upper hull sides closer to the vertical. Later variants had a rotating periscope for the driver, a new exhaust arrangement, a new gun mantlet with a reinforced "chin" designed to eliminate the shot trap and a new engine deck layout with a raised fan cover. There are also designs with steel wheels and also with the new Schmalltürm turret. In April 1945, the last Panther was produced. 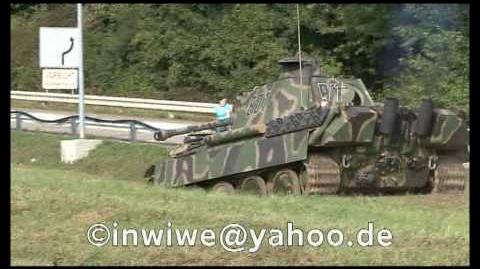 In 1944, a new weapon will do its debut; it is the Night Vision device. A special German unit, entered the battlefield with modern equipment. Five Panther Ausf A and G's will be equipped with the new 30cm Sperber FG 1250 infrared searchlight with a range of 600m. Opposite the Ausf A, only the gunner and the machine-gunner on the roof will have a night vision. The driver did have not the night vision. However, ingame the driver will of course use the night vision as he is also the gunner. The machine-gunner in the hull does not have night vision.

This experimental Panther was a Panther with a gas turbine engine named GT 101 that almost doubles the speed! The German Army's development division, the Heereswaffenamt (Army Ordnance Board), studied a number of gas turbine engines for use in tanks starting in mid-1944. Although none of these were fitted operationally, the GT 101 (GT for "Gas Turbine") reached a production quality stage of development and was considered for installation in the Panther tank. Several designs were produced over the lifetime of the program, including the GT 102 and GT 103. In terms of performance the GT 101 would have been surprisingly effective. It would have produced a total of 3,750 hp, using 2,600 hp to operate the compressor and thus leaving 1,150 hp to power the transmission. The entire engine assembly weighted 450 kg (922 lb), not including the transmission. In comparison, the existing Maybach HL230 P30 it replaced provided 620 hp yet weighted a comparatively huge 1,200 kg. With the Maybach the Panther had a specific power of about 13.5 hp/ton, with the GT 101 this would improve to 25 hp/ton, outperforming any tank of WWII by a wide margin (for instance, the T-34 was 19.23 hp/tonne). For other reasons, essentially wear and tear, speeds would be deliberately limited to those of the gasoline-powered Panthers. The only downsides were poor torque at low power settings, and a fuel consumption about double that of the Maybach, which presented problems in finding enough room for fuel tankage. You can test it on the map Adak Race against all other high speed vehicles. But also on Alpenfestung. Who will make a donut?

One of the two working Panther tanks that were captured during the Warsaw Uprising, the other one was named "Felek". "Pudel" proved to be the one that survived for the longest of the two. A nickname for the vehicle by the crew was "Magda". All german insignia has been covered and replaced with symbols for Poland so as to avoid friendly fire. The lily of the scouts, the letters "WP" on the back of the turret (acronym for the Polish army) and the red and white of the Polish flag.

Along with the Tiger tank the Japanese government bought they also bought a Panther tank. Neither did arrive. The exact variant that was sold was the Ausf. D.

Retrieved from "https://fhsw.fandom.com/wiki/Panzerkampfwagen_V_Panther?oldid=26084"
Community content is available under CC-BY-SA unless otherwise noted.