The Sturmgewehr 44 or Stg 44 was a German automatic rifle and the first assault rifle. It was designed in 1942, it was a continuation of the Maschinenkarabiner 42 (made by Haenel) and produced between September 1943 and May 1945. This flat stamped piece of metal, with a wooden butt, had a rate of fire of 500 rounds/min, muzzle velocity of 685 m/s and the magazine held 30 7.92×33mm Kurz rounds. The Stg 44 was a better designed version of the MP-43 and was first called the MP-44. Hitler ordered that the gun be scrapped and that they design something else, because he thought the stamped metal design was "ugly." However, his generals took fate into their own hands and continued producing the MP-44 in secret. When Hitler found out, he was furious and was only quelled when he heard the stunning success the weapon had displayed in the field and decided to rename it the Sturmgewehr, or storm rifle, in an attempt to take some credit for it. This is where it got the designation Stg-44. Later, Soviet experience with the weapon lead to AK-47 but the design was not a copy mechanically, elements of the design were from multiple weapons, such as the M1 Garand. The Stg 44 had some remarkable features for the time period. It had a wrinkled look, had a long curved magazine, was more than 80% from steel.

In FHSW, many accessories are available for the weapon. A Zielgerät 1229, or ZG 1229, night vision sight, also known by its codename as the Vampir. You do not "scope in" with this weapon but have the night vision effect regardless. Found on the map Spurning Fate. 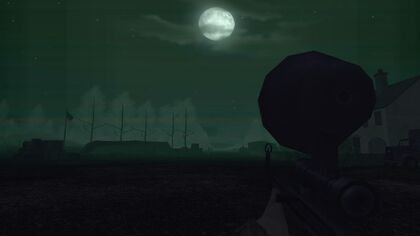 The "Krummlauf" (Curved Barrel) attachment is only used on the Stg 44 mounted on the E-10 vehicle, so the user and weapon is safe and can be reloaded whilst in the vehicle. This is the "P" (Panzer) variant and there also was a "I" variant for the infantry with many versions of different bends from 30 degrees 45, 60 and as much as 90. The most produced variant which also had the longest but still short lifespan of 300 rounds had a 30 degree bend. 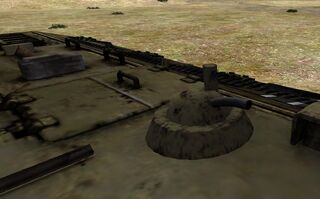 On some maps set in 1945 in FHSW the Sturmgewehr is either replaced or "complemented" with the Volkssturmgewehr 1-5. This is to represent the fact that not enough of them were produced to meet the need. As the Sturmgewehr 44 is the better weapon of the two.

The Stg 44 can also be equiped with a Zielfernrohr 4 telescopic sight. It does not have as much zoom as the full power scopes mounted on bolt-action rifles but this sight makes the Stg 44 an excellent sniper weapon while still being useable at shorter range when unscoped. However, for this role you can only shoot in short bursts. Because during automatic fire, the recoil is high when scoped in. This variant is quite rare, you can find it as pick-up kit on some maps. In the kit there is often a knife, the Stg 44 and a pair of binoculars.

This and the Type 96 LMG are the only fully automatic handweapons that have a scope mounted.

Retrieved from "https://fhsw.fandom.com/wiki/Stg_44?oldid=26319"
Community content is available under CC-BY-SA unless otherwise noted.