The Sturmgeschütz III, or StuG III, are a serie of assault guns from Germany during the war. The Ausf F, F/8 and especially the Ausf G are know as the most successful German tank design in the war. Based on the Pzkpfw III, this was a assault gun,iInitially intended as a mobile, armoured light gun for infantry support. But after replacing the short 75mm KwK 37 with a longer and powerfull 75mm Stuk 40, it become a powerfull tank destroyer! Later in the war, the Stug III was followed by the Stug IV. Same design but modified on the Pzkpfw IV chassis. The Stug proved a very successful during battles and served on all fronts. It saw action during Operations in 1940 until the end of the war! You will find the Stug on most German maps with vehicles. From the beginning like Eastern Blitz with the Ausf B until the end like Berlin Outskirts withb the Ausf G (Late). In FHSW we got 3 versions:

The second produced version was the Ausf B. It was the Ausf A built on the Pzkpfw III Ausf F chassis with front armor increased to 50mm. The Ausf B got, like other following models, no Panzer III's escape hatches on either side, which are present in the Ausf A model. The differents between the Ausf A was widened tracks (38 cm), two Rubber tires on each roadwheel were accordingly widened from 520x79mm to 520x95mm each. Both types of roadwheels were interchangeable. Troublesome 10 speed transmission was changed to 6 speed. Front most return rollers were re-positioned forward. This reduced vertical movements of tracks before they were fed to drive wheel, hence lessening the chance of tracks being thrown. In the middle of production of Ausf. B. original drive wheel with 8 round holes were changed to a new cast drive wheel with 6 slots. This new drive wheel could take either 380mm tracks or 400mm tracks. 380mm tracks were not exclusive to new drive wheels.

After a lot of changes which led to many variants, the Ausf F got the first real upgunning of the StuG. This version uses the longer 7.5 cm StuK 40 L/43 gun. Firing armor-piercing Panzergranat-Patrone 39, Stuk 40 L/43 could penetrate 91mm of armor inclined 30 degrees from vertical at 500m, 82mm at 1000m, 72mm at 1500m, 63mm at 2000m, allowing Ausf. F to engage most Soviet armors at normal combat ranges. This change marked the StuG as being more of a tank destroyer than an infantry support vehicle. Exhaust fan was added to the rooftop to excavate fumes from spent shells, to enable firing of continuous shots. Additional 30mm armor plates were welded to the 50mm frontal armor from June 1942, making frontal armors 80mm thick. From June 1942, Ausf. F were mounted with the longer 7.5 cm StuK 40 L/48 gun. Introduction of an improved hull design similar to that used for the Panzer III Ausf.J, Panzer III Ausf.J¹ and Panzer III Ausf.L with increased rear armor. This was 8th version of Panzer III hulls, thus the designation "F/8." This hull has towing hook holes extending from side walls. From October 1942, 30mm additional armors were bolted on to speed up the production line. From F/8, 7.5 cm StuK 40 L/48 gun becomes standard until the very last of the Ausf.G wich was the final and by far the most common of the StuG series. The Ausf.G used the hull of the Pz.Kpfw. III Ausf. M. Upper superstructure was widened: welded boxes on either sides were abandoned. This new superstructure design increased its height to 2160mm. Backside wall of the fighting compartment got straightened, and ventilation fan on top of the superstructure was relocated to the back of fighting compartment. From May 1943, side hull skirts (schurzen) were fitted to G models for added armor protection particularly against anti-tank rifles. Side skirts were retro-fitted to some Ausf. F/8 models, as they were be fitted to all front line StuGs and other tanks by June 1943 in preparation for the battle of Kursk. Mountings for side skirts proved inadequate, many were lost in the field. From March 1944, improved mounting was introduced, as a result side skirts are seen more often with late model Ausf G. From May 1943, 80mm thick plates were used for frontal armor instead of two plates of 50mm+30mm. However, backlog of completed 50mm armors exited. For those, 30mm additional armors still had to be welded or bolted on, until October 1943. A rotating cupola with periscopes was added for the commander for Ausf G. However, from September 1943, lack of ball bearings (resulting from bombing of Schweinfurt–Regensburg mission) forced cupolas to be welded on. Ball bearings were once again installed from August 1944. Shot deflectors for cupolas were first installed from October 1943 from one factory, to be installed on all StuGs from February 1944. Some vehicles without shot deflectors carried several track pieces wired around the cupola for added protection. From December 1942, a square machine gun shield for loader was installed, allowing an MG 34 (ingame Mg42) to be factory installed on a StuG for the first time. F/8 models had machine gun shields retro-fitted from early 1943. This was the early Ausf G version. 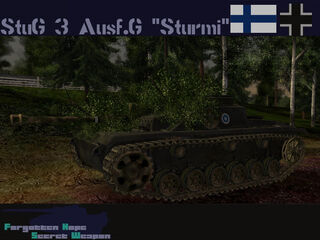 There are some modifcations on the Ausf G. From March 1943, driver's periscope was abandoned. Machine gun shield for the loader was later replaced by rotating machine gun mount that could be operated by loader inside the vehicle by a periscope. On April 1944, 27 of them were being field tested on the Eastern front. Favorable report lead to installation of these "remote" machine gun mounts from summer of 1944. Later G versions from November 1943, were fitted with the Topfblende (often called Saukopf) gun mantlet without coaxial mount. This cast mantlet with organic shape was more effective at deflecting shots than the original boxy mantlet armor of varying thickness between 45mm and 50mm that you can find on the Ausf F, F/ and ealy Ausf G models. Lack of large castings meant that boxy mantlet was also produced until the very end. Coaxial machine gun was added first to boxy mantlets from June 1944, and then to cast Topfblende from October 1944, in the middle of "Topfblende" mantlet production. With an addition of coaxial, all StuGs carried two MG 34 machine guns from fall of 1944. Some previously completed StuGs with boxy mantlet had a coaxial machine gun hole drilled to retrofit a coaxial machine gun, while Topfblende produced from Nov. 1943 - Oct. 1944 without machine gun opening could not be tampered. Also from Nov.1943, all metal return rollers of a few different types were used due to lack of rubber supply. Zimmerit anti-magnetic coating to protect vehicles from magnetic mines were used from September 1943-September 1944 only. This was the late version and final Stug III variant!