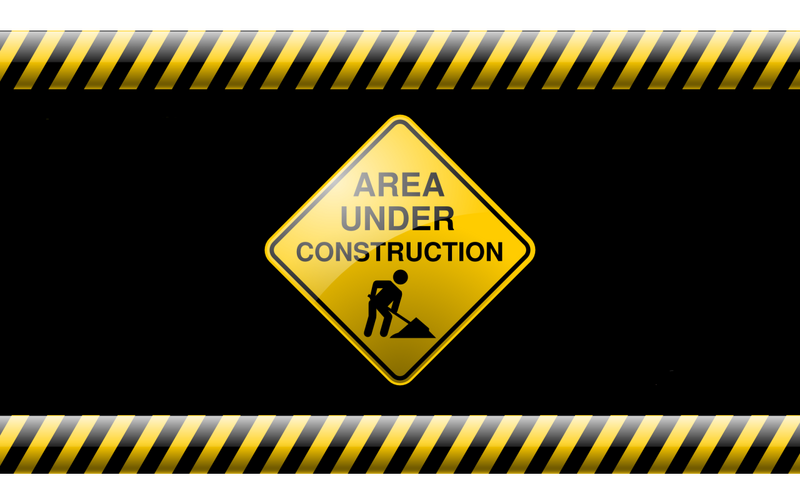 Hello and welcome to this Tutorial for the Battlefield 1942 modification Forgotten Hope Secret Weapons. Please read this Tutorial if you are new to the mod. Because this can help you know more about the gameplay.

Before we start, we will warn you that the mod has - just like Forgotten Hope - gameplay is quite different to the standard Battlefield 1942. In Battlefield 1942, a Tiger can easy be destroyed by a Sherman tank with 75mm gun and also by handgrenades. We will tell you that you can not do this anymore in the mod and we also learn you some tricks! Do you know a trick? Just suggest it on the Talk Page!

Estimating distances with the knife or shovel[edit | edit source]

- Take your knife or shovel. Right click with the knife or shovel and look at your designated target. Imagine how tall a person would be if it was standing right next to the target. Now look which bar of your zoomed knife comes closest to that height. In this case it’s 150 m (see first pic). That means that the target is 150 meters away. 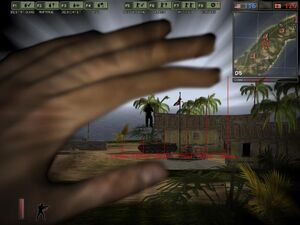 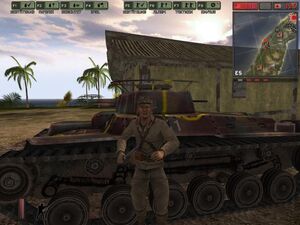 - Equip the rifle grenade, rocket laucher, mortar or any other anti-tank handweapon, right click and aim with the 150 m marker at the center of the target and then hold it and fire! When the grenade hit the ground between you and the target, lower up your weapon. Behind the target, lower it down. 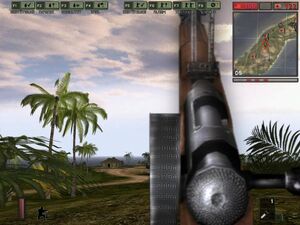 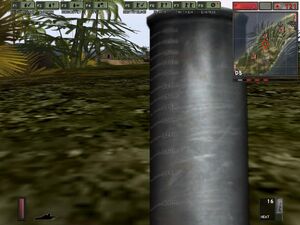 - Sometimes you have to interpolate between to bars: The target on this picture is between 50 and 75 m away, aim accordingly. 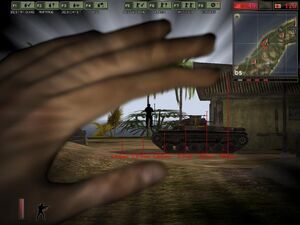 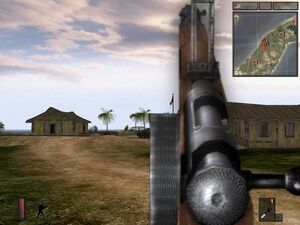 Take your binoculars which you mostly can find in Officer, Tank Crewman and Scout kits, but also on some mortar kits like the Knee Mortar. Right click with the binoculars and look at your designated target. Measure the length or width of it in bars by using the binoculars' reticle. The tricky part, you have to know the length/width of your target. Then you can calculate the distance: (Length or width of the vehicle in meters x 1000) : bars. That means for our example: Sherman length = 5,84 m (5,84 m x 1000 = 5840) 5840 m : 18 = 325 m. It's close enough if you just use 6 m as length for the Sherman (the result is 333 m then). Aim with your weapon of choice and fire. You can barely see the Sherman in the right picture. You have to be very lucky to hit a target at that distance. But it's accurate enough to give some support fire. Also it can be very hard to calculate the range if you're not good at mental arithmetic. A good tip is to note the length and width off all vehicles on a paper (you can write them under each country) and keep them visible while playing. 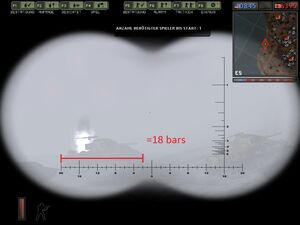 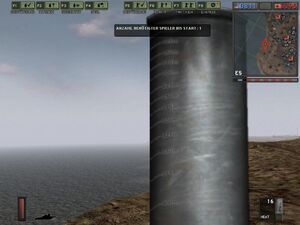 This method works exactly like the knife. Take your binoculars. Look at the vertical scale of your binoculars. This is how you read it: An imagined (standing) person next to your target fits between the bottom of the vertical scale and the line with the '1' next to it --> Target is 100 m away. 2 = 200 m, 3 = 300 m, etc. Distance between two horizontal lines = 25 m. The target is 225 m away. 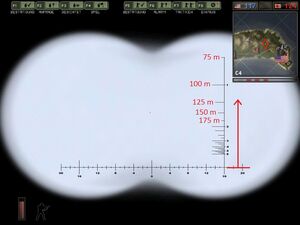 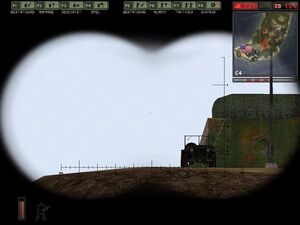 All weapons are less accurate while on the move especially longer weapons like rifles, machineguns rocket launchers, fire when standing still or for faster and more accuracy in a crouched or prone position. It should be noted that all weapons are more deadlier than in standard Battlefield 1942, most kill with one shot to the chest. And the medic class is uncommon which means it harder to be healed since you have to find a place to heal on the map.

What are the Ingame Ammunition variation and for what usage? (Handweapons)[edit | edit source]

Weapons that ammunition are mostly anti-tank weapons, sometimes this variation is not available and only a single Anti-Tank (AT) ammo type is. Such weapons are the Solothurn AT rifles which can also fire HE rounds which are more effective against infantry and unarmoured targets. The M1 Bazooka and Kampfpistole can launch handgrenade projectiles way further than the same type of grenade can be thrown by hand. Both weapons can also fire smoke rounds, providing concealment both to those in and behind the smoke cloud.

Other weapons that have a high ammunition variety are flareguns such as the Leuchtpistole 34/Kampfpistole and Type 10 Signal Pistol. As flare guns these have marker and signal rounds. But the Kampfpistole can also be used as combat weapon using high explosive (HE) rounds and HEAT rounds against vehicles.

The effects between the ammunition variation (Handweapons)[edit | edit source]

Some ammo types are used for the same purpose, such as against vehicles but have different effectivness. For example, the M6A1 is the standard Anti-Tank HEAT rocket for the M1 Bazooka and the T12 rocket is essentially the same but more effective but the T12 is uncommon and does not appear at all on maps set before 1944.

There are two different main classes of rifle grenades which operate differently. The standard is often in rifleman kits for most armies, is only effective against soft targets and has a delay between pressing the trigger and the grenade being fired of about a second which has to be taken in account. The other are Anti-tank rifle grenades or HEAT that is used against vehicles. These have specific kits either named "Grenadier" or for the japanese that have three rifle grenades of this type, the specific grenade. Such as "AT-Grenade" or "Type 2 HEAT 75mm". There is no delay with these rifle grenades. But multiple hits are probably needed to take down an armoured vehicle.

Each available ammunition type occupies a certain inventory slot where the ammo type is stated. You do not have to reload the weapon to switch ammo type. You only switch to the specific ammo type to use it directly unless you have not reloaded the weapon previously when firing. 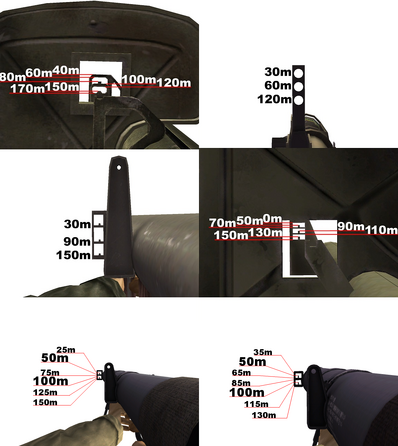 All light machine guns and anti-tank rifles have a bipod which can be used, it is used automatically when going prone. When you use the bipod (7 by default if availabe), you can't move! Using the bipod on anti-tank rifle eliminates sway, making it more steady and accurate which is good since most weapons of this type have to hit most targets multiple times and have a low rate of fire.

You can use machineguns on bipod found on maps mounted on walls, sandbags, on ground and much more. You can find special weapon kits near flags and bases that can deploy these heavier weapons such as machine guns or mortars. Some machineguns can only be fired when delployed this way or on vehicles, such as the Soviet DShK. These deployable machine guns can be placed in different kinds of tripods or "firing positions", one low position where the operator is prone and another tripod where the operator is crouched instead which is more vulnerable but also provides a larger field of fire for the gun. Some weapons have a third type of tripod which is Anti-Aircraft mode where the operator is standing up and can fire in any directions and can turn fast, unlike other tripod variants which have a limited field of fire and the entire thing (including tripod) has to be turned to fire in a different directions. But since the operator is standing up you're also a even larger target. When you leave the machinegun, you pick up it automatically so you can move and place it down again.

A risk when using a machine gun or other emplaced weapon is that you are easy to hit and see since you are not shootingmoving Like in Battlefield 2, you can take cover in FHSW. By pressing the "S" button (Default). This is only for stationary machineguns, machineguns drop on tripod or machineguns on vehicles. When you use a machinegun, assault rifle or anti-tank rifle on a wall with your bipod, you can hide you behind walls by pressing the "Left ctrl" button (Crouch on Default Settings) or on the "Z) button (Prone in Default settings).

Some rifles have bayonet which can be used by pressing "1", instead of zoom like you would have otherwise you attack using the bayonet. The rifle can be fired as usual with the bayonet fixed.

Although there are differences between melee weapons, most hits with these will result in a kill.

There are Mortar kits. You need just to pick this up and drop it. When you leaven, it will automatic pick the mortar up. A good hint: place your mortar two metres behind the wall so you get cover. And if you can, in a bush or other camouflage. 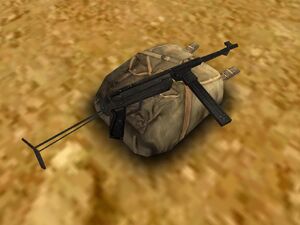 
Before you spawn, you need to choose the class you want. You will see which have a parachute by seeing a parachut in the icon. Some classes are only available as pick-up kits, like the special forces, which have also a parachute. You can recognize it with the parachute bag on the ground.
Sometimes you will spawn in the air and then you of course have a parachute. Example: the German invasion on Cretan Village

So what have we learn today? Don't jump before you are sure you have a parachute. Because jumping out a damaged aircraft after a fight, is not fair sportsmanship and results only in a loss of points.

There is only one other type of parachute and that is the BT-7 parachute. This is a very rare pick-up kit. You fly with a Russian Tupolev TB-3 over the battefield and you drop a BT-7, wich will land with a parachute. You can find this weapon back on Alaska.

Retrieved from "https://fhsw.fandom.com/wiki/Tutorial?oldid=24750"
Community content is available under CC-BY-SA unless otherwise noted.